I wanted to take a few moments to introduce a shard I’ve been working on for quite some time: 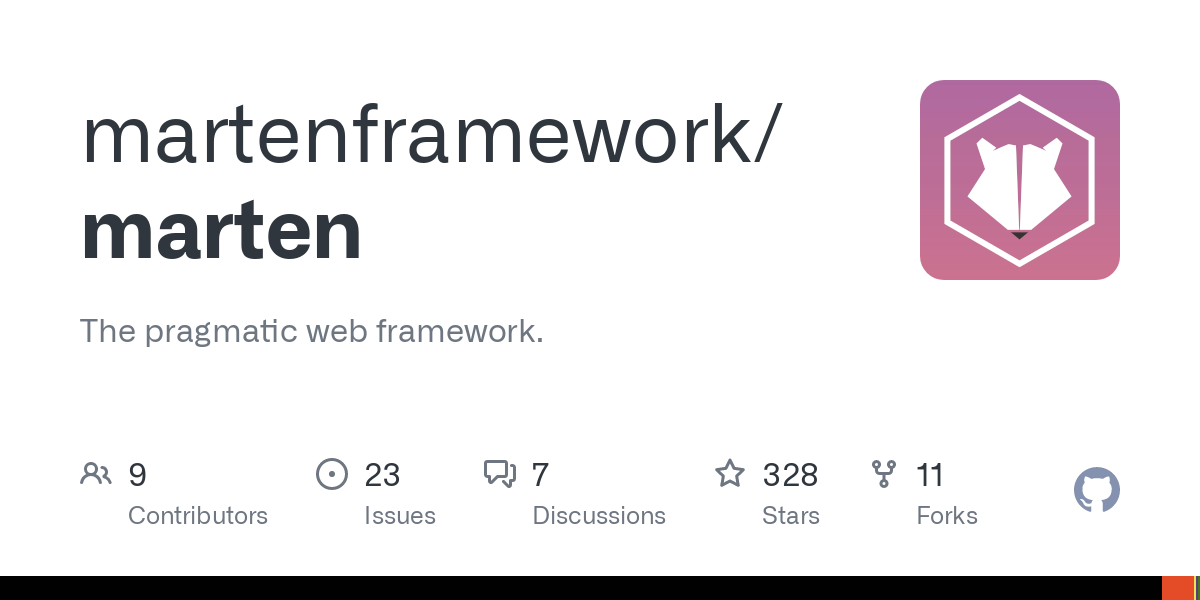 The pragmatic web framework. Contribute to martenframework/marten development by creating an account on GitHub.

Marten is a Crystal web framework that makes building web applications easy, productive, and fun. You can read more about it in the dedicated documentation.

Marten is a Crystal Web framework that enables pragmatic development and rapid prototyping. It provides a consistent and extensible set of tools that developers can leverage to build web applications without reinventing the wheel. As it stands, Marten focuses on the following aspects:

How does it differ from existing frameworks?

My goal here is not to draw a direct comparison with other existing frameworks. I simply want to highlight a few key things that (I believe) Marten is bringing to the table and that differ from what has been encountered in the Crystal world so far:

The framework is certainly not feature complete (nor necessarily stable) but it can already be used for relatively simple web applications. I am looking for feedback from people who would like to play with the framework and / or leverage it in simple projects.

If you find a bug, don’t hesitate to open an issue into the project’s issue tracker on GitHub. Any help will be greatly appreciated!

Thanks for reading me!

I’m getting the following error while installing due to ameba

Is there something builtin for auth? Looks really great. Seems simple to use. Will try to play around with it in coming days.

Holy smokes! This is awesome. After a minor bump on installing from source (I failed to install the shards and include the -o switch for the binary output to the bin directory), I ran the tutorial to the end. Can’t believe how simple this is to use. Definitely going to be exploring. Thanks!

Is there something builtin for auth? Looks really great. Seems simple to use. Will try to play around with it in coming days.

There is no built in authentication mechanism presently. This is something that I plan to add in the near future, but I’m not sure (yet) if this will be built in the framework directly or distributed separately in a dedicated app / shard.

Would be interesting to leverage the type system and multiple dispatch when rendering templates.

This way some logic could be kept out of templates along with various conditional code.

Not sure if what I’m trying to say makes sense ?

Not sure if what I’m trying to say makes sense ?

It makes sense. It is described also here as “method overloads” in Lucky web framework logic:

While the screencast is recorded through the lens of a Lucky application, I hope this introduction to method overloading will be useful to anyone like me coming from the Ruby/Rails world where this kind of clean structure is a lot harder to achieve! [Using Crystal Method Overloads in Lucky Applications]

Also have to say…great documentation.

A marten update command would be great to quickly update as new versions are released.

I wish there was a way to not wait for recompilation everytime a change is made. But i dont think there is any other option. Unless the new crystal interpreter could be used during dev and then compile for prod.