I have a weird memory usage problem that I’m looking to solve
Have an application that is using up a lot of memory in real terms, however internally it’s not reporting much memory usage at all.

However when I use top:

Memory usage seems to be increasing by ~100MB per instance of a class being instantiated. However GC class doesn’t seem to report on it and instead reports what looks like a much more reasonable increase of a few KB…

I used gcore to grab a core dump of the running process and can see basically all the memory is unused - but not really sure how best to debug this.

to understand what is causing either huge block allocation or segmentation. Having such information at hand will enable you make more informed decisions instead of shooting in the dark.

Does your program use any C bindings? Memory allocated by C functions won’t be reported by the GC because it’s memory unknown to the GC. If there’s a memory leak, one thing might be that C resources are acquired but never freed.

Does your program use any C bindings?

OpenSSL and LibSSH2 but in this case nothing is being initialized.
So fairly sure neither should allocating anything.

If you are allocating that much at once it may also show up during regular profiling.

What’s the difference between all the GC.stats values?
There is 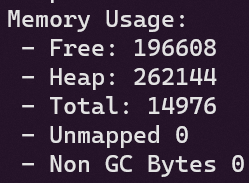 A quick, not very helpful answer is in the bdwgc include file. This said, information can sometimes be confusing.

Thanks for the link. It does mention that total never decreases, so I assume it’s total allocations over the lifetime of the process - not total current usage. I agree that the comments are not exactly clear